What is Split Testing? | Design, Implement and Track Results

Split testing simply means “Comparing two distinct designs”. It is one of the great tools for figuring out the best promotional and marketing strategy for the product or service. It is the process of testing two web elements to find out which performs better.

Suppose You have a sales page with the name ‘Weight loss technique post-pregnancy’ having 15-20% Opt-in Rate and you named it again as “Follow this and you will be back to your slim figure after post-pregnancy” and see the change in conversion rate’ which enhanced to 40-50% conversion rate. It denotes you are getting twice as many subscribers for the exact same ad spent which means,  you are doubling the Opt-in rate of ad spent i.e not spending more money to get twice as many people to optimize the funnel.

The split test helps in improving the conversion rate of the funnel slowly and steadily.

Split testing generally focuses on testing one thing at a time. If it’s a headline, the headline is the only thing you can change.

If you are testing your offer, the offer is the only thing you can change.

What Are The Split Testing Elements:

What Are The Steps To Implement Split Testing :

1. Start with a specific reason to test

Just like a science experiment, a split test begins with testing an element of the control version against the same element of the variant. Let me tell you split testing should be data-driven.

Develop a hypothesis on the element of your web page you want, which you want to improve.

Let me give you a simple example-

In most areas, the commonly accepted level of significance is 95% which specifies that :

At the conclusion of your test, there is a 5% chance that your results are due to chance. You can calculate the sample size manually but for that, you need to know some serious mathematical calculations. Fortunately, there are various tools that make calculations easier such as a significance calculator, Optimizely’s calculator.

Once you have got the sample size, make your adjustment. If you are changing the headline, update it.  If it involves switching the featured image, do it provided that the original post click landing page remains the same.

Eliminate the confounding factors in the middle of the test, which could result in a misleading outcome.

5. Drive traffic to your pages

Now it’s high time to drive traffic and test something that has a high impact on the customer’s psyche. Calculate the number of days for which you need to drive traffic. If it is a longer duration then consider running a campaign or two to push some paid traffic or take advantage of your follower’s list on Facebook or subscriber list on e-mail marketing.

For instance, you send promotional email traffic to a page that you are running to test on. People who subscribe to your list like you way more than your average visitors. So you optimize your page to work with your loyal traffic thinking they represent the total traffic.

Just because your post-click landing page is better than the previous, it does not mean it is the best and this is the end result. So keep on analyzing and keep on optimizing. No campaign is perfect.

Once you get into this element of marketing campaigns, whether it is improving headlines,  from texts ad to landing pages, you will see Split testing’s best practices contains rough guidelines. You never know what is going to work for your audience until you test this. This is not about discovering new ideas rather it is about exploring the market and studying users and collecting viable information to excel in marketing strategy.

So what is the single most surprising effect you have ever achieved in split testing?

you will get this answer from the below players.

I hope you will find this to be fun and inspiring as I do.

Wall monkey is a company that sells diverse wall decals for homes and businesses.

And guess what this company uses: It uses heatmaps to generate user behavior reports to run the tests and the results are pretty incredible.

As you can see, there are lots of activities (the most clicked areas and neglected areas) on the headline, CTA logo, Navigator bar, and headline.

The wall street decided to run the A/B test after generating the user behavior report. The company used a stock style image that would show visitors the opportunities to enjoy wall monkey’s products. No doubt the stock style images give a high- end feel to your products and lends an air of professionalism to your site.

The conversion rate for the new design increased up to 27% higher than the old one.

Remember: Once you get the results, repeat the testing experiments. Because no result is the final result. You must keep on trying to boost conversions.

This time the business replaced the slider with the prominent search bar.

The idea is to draw customers’ attention to the search bar while they search for items in which they have an interest.

The idea worked and the conversion rates specifically increased to 550%. The company did not end up with testing the elements and as a result, the company showed immense profit potential as well as better user experience for its visitors.

People often use them interchangeably. But you can note out the difference below:

AB Testing refers to two web pages or website variations that are competing with each other.

Split testing refers to traffic that is equally split between the variations.

Like A/B testing, split testing ensures, that you do not form decisions on gut feeling or mere guesswork.

Why Split Testing is important :

Unlike A/B testing, Split testing does not give you results with a fluke or gut feeling. Without this source, the decision would have been taken either on the basis of Best Practices or according to the highest-paid authority. So the highest-paid authority’s opinion can be flawed as anyone else’s. Split testing is like letting the user decide and prevent an Optimisation team from reaching the dead end. 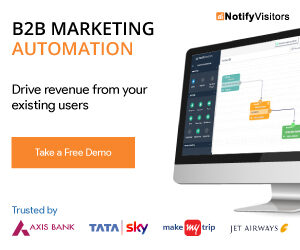 Pros and Cons of Using Artificial Intelligence in Education

Segmentation Statistics That You Must Know in 2021

What is Customer Loyalty? Why is it Important for Your Business or Brand?

How to Enhance Customer Experience With Marketing Automation?

The Ultimate Guide to Mobile App Marketing for 2021